It’s that time of year again and as always Sweet ‘Art will be visiting as many University degree shows as possible, as we love the buzz and excitement which comes from students celebrating the conclusion of their studies and creating ambitious and often boundary-pushing new work.

As always, UEL gets an early slot in the calendar and with three of the Sweet ‘Art team being alumni of the course, we were eager to see what was in store. Our favourite picks of the exhibition, which is titled East London showcase and can still be viewed until 25 May, are – in no particular order: 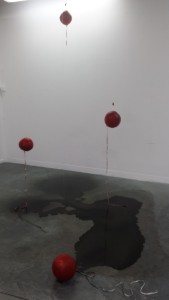 Carolyn J Whittaker’s piece (unfortunately we did not manage to take down the title of the piece) was the first stand-out in the show. Large, glossy red spheres hung suspended from the ceiling, and slowly dripped to create puddles on the floor. Reminiscent of glace cherries or balloons, the obvious weight of the spheres, plus the slow, sorrowful drip reminded me of the end of a party – a feeling evoked similar to that in Anne Hardy’s ‘Untitled IV (Balloons)’ with it’s connotations of entropy and decay.

Andrea Bigby’s ‘P.A.C.E’ also caught our eye. Apologies for the poor installation shot, but due to the nature of the piece it was hard to capture effectively. This was a series of hung prints, on a not-quite opaque paper. Some of the images were very slightly grainy or blurred which meant that when the installation was seen from different viewpoints, the layering created a filmic sense of movement or time.

Next we came across the work of Ryan Prince, and enjoyed two of his pieces. ‘Domestic Departure’ was shown as a wallpaper hanging which we enjoyed for the unusual display method.

Ryan’s other piece was a darkly comic photograph titled ‘Goodbye (To Fine Wine)’. The works seemed to explore ideas of mass-production and consumerism, but with a lighthearted touch which was appealing. We liked the juxtaposition of the fairytale-like characters of the bird with a mundane setting.

The final piece we loved was Daniel Reid’s ‘Astray’, a film composed entirely of shots of abandoned hairbands, which was really nicely shot and again there are similar ideas brought up to those of Carolyn Whittaker around entropy and Ryan Prince’s repetition of a theme. Is it just us, or did we also spot a hint of John Smith’s influence of the reflection of the urban in there too?

In addition to the BA Fine Art show, there were Photography and Fashion & Textiles shows on which sadly we did not get time to view, but will certainly be checking out UEL’s output next year!